Good times at Except For Kenneth in Hamilton on Thursday eve. Thank you Susan for your warm welcome. Vocal mics and PA speakers were set aside (after some initial tech issues), the formality factor turned down a notch or two, in favour of an un-amplified performance. We might as well have all been gathered around a kitchen table. I'll remember this night for the audience's soulful listening as well as their insightful questions and thoughts in between songs. Humbled and honoured that one of you suggested that my sonic/aesthetic approach was reminiscent of Owen Pallett.

The next day, I played at lunch hour in the brand new Hundreddollargallery at the epicentre of James St. N. arts district in Hamilton. Congratulations Stephen and Andrew on landing your dream on/in some prime real estate. Such a beautiful space for showcasing some very fine artists. We also discovered it's a pretty cool room in which to play with ambient soundscapes. Had lots of fun layering improvised violin parts.

I've known Stephen for a long time and admire both his art, work ethic and courage. And now his social media/marketing acumen too. I have a little bit to learn on the latter.

Off to The Brownstone Cafe in Orillia soon for this evening's 10 PM performance. Last show of 2015! 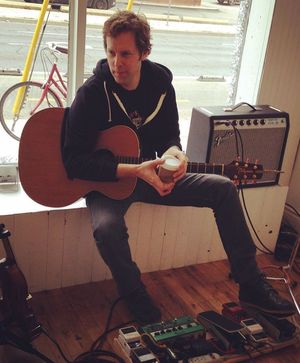